So it's been a hot minute since I put anything up on the blog. The initial wave of momentum has long since dried up. At least, that's the low quality excuse I'll feed my reading audience. Like I outlined in the initial facebook post, I'll be providing more piecemeal updates over on the OzTabletop Forums themselves. I'm not saying posting a blog article is inconvenient, but it is somewhat of a square peg in a round hole.

So to back up a bit, these were my hobby goals:

I also had some optional goals:

So, that's a lot to get through and not likely to get achieved - but that hasn't stopped me in the past. My first stop was the excellent retailers at Miniature Scenery for some intact MDF buildings. A week later, my 60x44 table looked like this: I will do a full review of these buildings at some point.

So I have reasonable coverage for a game of 40k. Nice start, but I'm not just going to play on unpainted terrain in my own house. Not unless I was particularly desperate that day. So the next part was to source some MDF bases. I contacted a local mob, Laser Shark Designs, gave them some measurements and before I knew it, I had some bases for my buildings.

I didn't take a photo of the unpainted MDF bases, but they were nice and unwarped and ready for me to ruin. So, I ripped in to get some momentum going. I started with a slurry of PVA, sand and water. After that, I gave the whole thing a blast of Army Painter Uniform Grey: 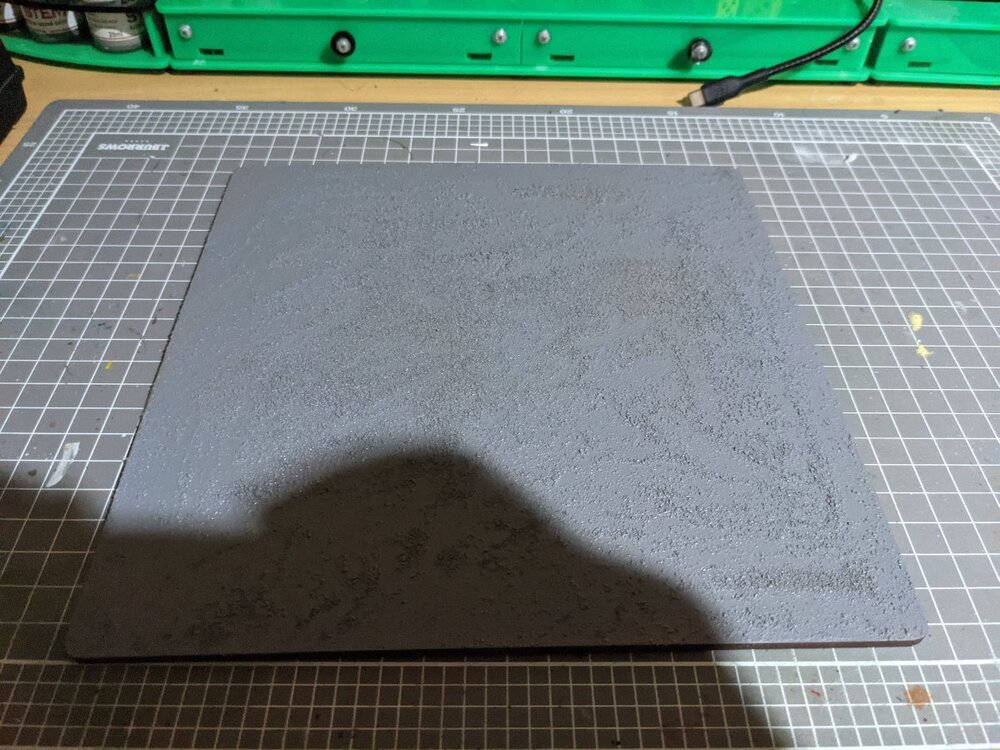 Then, because I'm a moron, I tried to airbrush color onto the base. Mistake, dude - mistake. Lots of expensive foundry paint and a drybrush later and it looked like this: 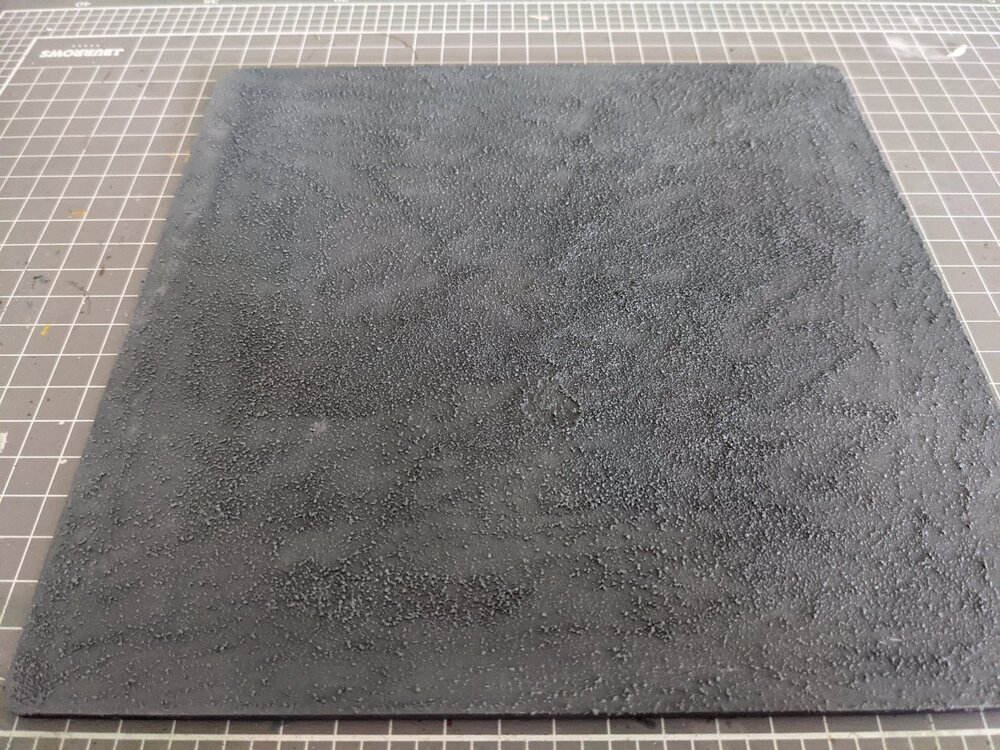 I won't lie, it's not awful, but it wasn't the texture I was aiming for. Not to mention the materials used to make it - well let's just say I wasn't going to be able to make it through eight to ten terrain bases with this method.

I put that aside for the moment, then moved onto the terrain, opting for a dark red, dual grey and gold scheme - nothing fancy, no edge highlighting or anything - just base colors. The end result, whilst a far cry from the elite custom tables of master terrain builders, looked pretty good: I could not stop thinking about the amount of time and materials it took to make that terrain base. And I knew that airbrushing terrain bases was not going to work out. So one small panic attack later and about half a day's whining to the resident terrain experts and I had a plan.

I made a run to Bunnings (I'm not linking Bunnings, they're doing just fine during the pandemic) and got some PARFIX pre-mixed grout filler, a Dulux Housepaint Grey Colour Triad and a crappy plastic brush and set to work: 2. Apply Housepaint. When you can buy 250ml of housepaint for six bucks, turns out it feels a lot better to slather it over an MDF base that doesn't care what kind of acrylic paint you use. The previous method was like putting 98 Octane in a Hyundai Excel. 3. Drybrush. Admittedly this one looks crummier than some of the other ones I've done later because I got too keen to deploy the housepaint and drybrush, etc, and the paint wasn't fully dry. I am creatively bankrupt and did copy that little spiel from my thread, you're right. I don't care.

I later blasted the building with varnish to keep it safe from stray bullets and falling miniatures, sealing in all that painted goodness. But I didn't take photos.

I've done another two pieces since then with designs on a fourth. It's taken me more time than I would've liked to get it all done, but I've enjoyed the journey thus far: So a little bit of bonus content that is not related to the deployment of the table, is that I've finished my test model for my Tyranid force. Ising the palette of the New York Giants and inspired by the 'Big Blue Wrecking Crew' defensive front of the Giants. Excuse to paint a lot of big bugs? You bet! I also had some time to lay out terrain on one of the mats I bought from Deep Cut Studio, a place in Lithuania (specifically a place where Napoleon's army of 1812 ended up - Vilnius). For a scrap between Dad's Grey Knights and my Salamanders: 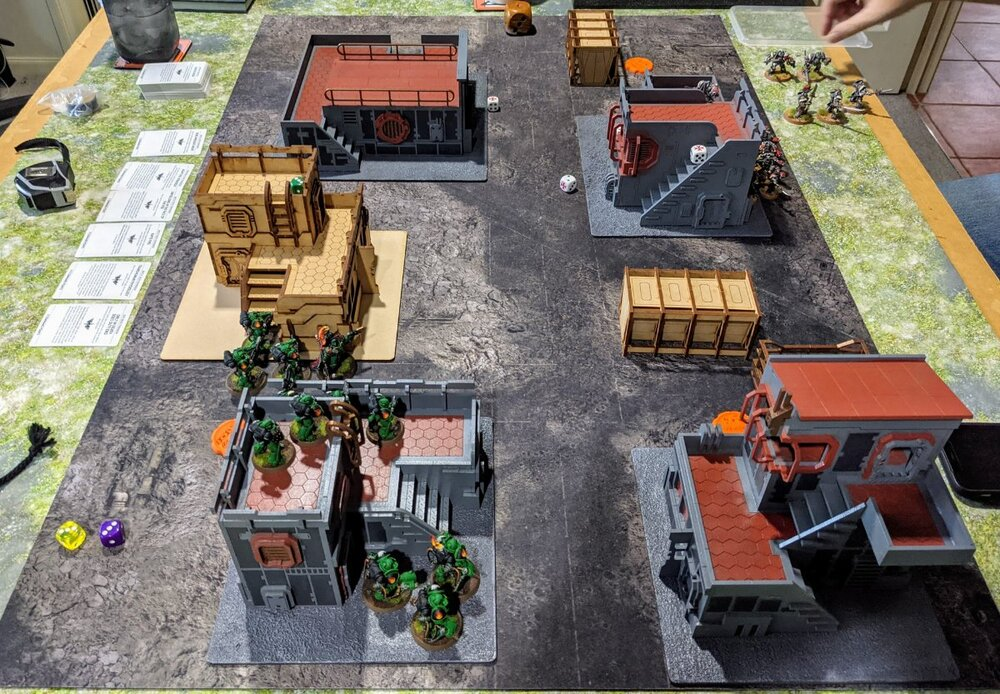 My layout was a bit too open for my liking and I'll be working on some different layouts to maximise gameplay. Currently I'm thinking of something like this:

That's all for this month - I'll see you at the end of March!