Let me make something abundantly clear before I "go in".

I love the products made by Games Workshop. They make the best miniatures in the world. Their rulesystems (at least presently, anyway) are tight, mechanically sound and work well as games, without sacrificing immersion. I think Warhammer 40k is in the best place it's been for a very long time, and is only going from strength to strength.

But Games Workshop, as a company, as a distributor - we need to talk. Tiny, ant-like psuedo-journalist-blogger-hobbyist to monstrous faceless hideously evil corporation.

Where to start. Well, let's talk about support for matched play.

I have no doubt that people playing matched play are the vocal minority. Much like Magic, interest in the hobby dramatically increased during the last 24 months. With that, would've been an influx of casual players who would very much enjoy the vastly simplified power level system, or even being able to play without using any sort of internal balance mechanisms at all.

But for us tryhards, we have to buy GW's little book of patch notes every six months. With points changes, minor gameplay adjustments, and very slightly different missions. Is that fair? Who knows.

I'll tell you I think it's a load of garbage. It's way too late to stop the party bus now. Knowing they can get away with asking for $40 every six months so people that play at local game store leagues, tournaments - and sometimes even at home because matched play is the most robust of the three systems (in my opinion, though I welcome your well thought out vitriol, theoretical reader.)

Maybe, just maybe, if that was the only sin GeeDub has committed regarding matched play and its continual updates, I could forgive. Maybe.

But the last two matched play books - Warzone: Nephilim and Grand Tournament: Arks of Omen have both been limited release. 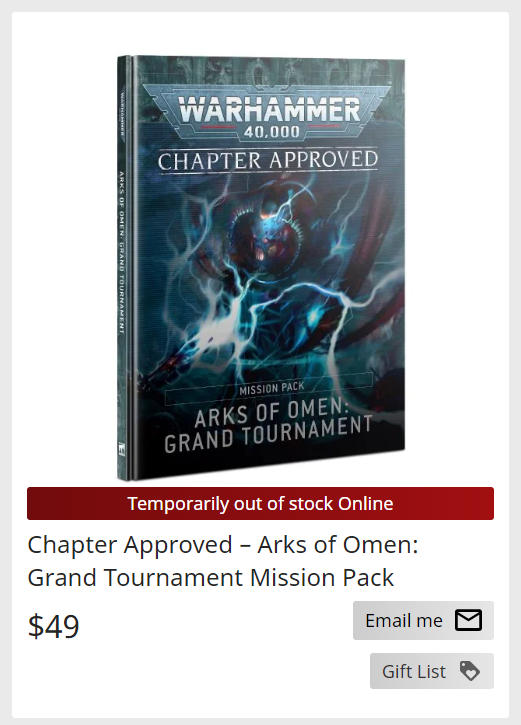 Is that some kind of sick joke? You produce a document everyone using the matched play system needs, in order to play your game, that you want people to play. You have an entire tournament circuit, including a hot-off-the-presses world championship announced in Atlanta, and you're limiting production of the book that players require to participate in events that may lead them to this event? Or, more likely, lead them to events that lead to this event?

Prior to the release of this fantastic book that I cannot buy from anywhere, I tried to secure a copy of the previous edition. The idea of paying $80 in the space of two months in order to keep playing the game as everyone else fills me with a particularly acidic bile, but, needs must. I went to multiple Games Workshop stores - the place where I should be able to find anything related to the hobby, cash in hand! Was told the product had ceased to exist.

I verified this information when I returned home. Not that I suspect the hard-working, honest storekeeper was lying to me, but because I had to see this for myself. Sure enough, a search for "Nephilim" turned up zero results. The website thought I had made a mistake!

I certainly had made a mistake, when I thought that even if GeeDub weren't decent enough to release mission packs, points changes and minor adjustments to the rules for free, they could at least stock the stupid book I needed to play the game! 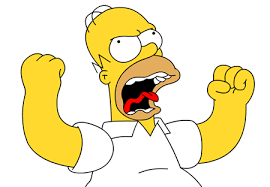 So, for a month and a half, rather than having a paper copy of the document I need to play the game, I've had to go onto some dodgy russian website to have any idea what I'm doing. Fantastic. I'm sure my ISP loves me.

I talked to the proprietor of my local game store. Fantastic guy, loves the community and puts on a brave face to work with Games Workshop so if people need miniatures, or glorified $40 books of patch notes, he can try to help them. Because the community in Canberra is as strong as it's arguably ever been (minus the entire tournament scene outside of my LGS, which has been completely destroyed) my LGS attempted to order 40 copies of Arks of Omen to cover their playerbase.

We're talking about the LGS that carries the 40k community in Canberra on its back. Because let's face it, no-one is having a regular 40k league night in the Games Workshop stores in my town. It's beyond not servicing the community, it's disrespectful. These players need your this DLC, are willing to pay for it, and have been told to spin on it by the evil empire.

I don't want to speculate on the likely causes for this issue - but an issue it most certainly is. You'd hope a big focus of the world's premier miniatures company would be ensuring consumers of your game can acquire product through any potential channel. As it stands, it's rubbish - and not good enough.

Of course, that's just the start. If you want to support your LGS (as I do, because it's an excellent place to play) and you ask for them to order miniatures, the evil empire may just elect to never fill your order.

I talked about this many, many moons ago with the Indomitus launch. It was a trainwreck then, but it's clear that GW hasn't learned anything. At least then people could still get a copy of the box set. Now apparently it's common for a non-GW outlet to request miniatures and be told that they'll be getting nothing, and thanks for your time.

It's such a confusing and baffling way to do business - does GW not like money? Is the thought of the playerbase buying miniatures secretly anathema to executives at the company? I can't imagine being a casual warhammer 40k fan, trying to buy miniatures from a non-GW location and being told "sorry, GW can't be bothered getting you what you need."

Which is a clunky segue into my next issue with Games Workshop and acknowledgement of the local community.

I appreciate Games Workshop makes more money when they sell products through their own channels. That's business and that's fine. It's why Wizards is so profitable (although, don't ask about the last six months.)

It's important to understand that unless your GW location is particularly prestigious, your local store is a showroom for GW products. It's too small to play a proper game in there, and there's (generally) no events like leagues or regular game nights. Just sales, Ned, $90 for your box of miniatures.

That's fine, but the game also grows by introducing new players to the game beyond a demo game. At events, at local game stores, and games on the kitchen table, players have much more exposure to the game and are tempted to buy in themselves. After all, if you can't get a game, why bother. It's the reason I haven't bothered to start that 6mm Team Yankee British army.

What GW seems unwilling to do, as a corporation, is acknowledge the role the LGS plays in the development and growth of the hobby.

As an example, I recently attended a casual event hosted by a game store which is neighbours with a games workshop. The local game store, wanting to foster goodwill with the evil empire, does not carry their products, and encourages players to buy their miniatures from the source. They still host Warhammer 40k events and foster community growth.

Whilst visiting the store, I overheard the conversation between a young customer and the staff member at the store. The customer was asking gameplay questions about unit viability - technical, mechanical enquiries. At no point did the salesperson ever suggest that the customer go and take a look at the games being played literally next door.

This isn't the salesperson's fault - they're following a direction set by Games Workshop. And quite frankly, it's utterly toxic. Yes, you could just sell miniatures. But I remember the last time GW claimed it was just a miniatures company and the rules came second. Pro tip, it involved the absolute train wrecks of 6th and 7th edition, AoS (which is a fine system, but shouldn't have cost us WHFB, which we still don't have back eight years later) and a CEO forced to step down. The hobby grows through the game, and it seems that GW is either not ready or not willing to accept that fact. Which is maddening.

Respect the people that have worked to build your game, or risk losing their support entirely.

As I said at the start of the article, I think the hobby is the healthiest I've ever seen it. The rules never better and the miniatures never prettier. But it appears, under all the progress, the old DNA of GeeDub still lingers.

I can only hope for improvement going forward.